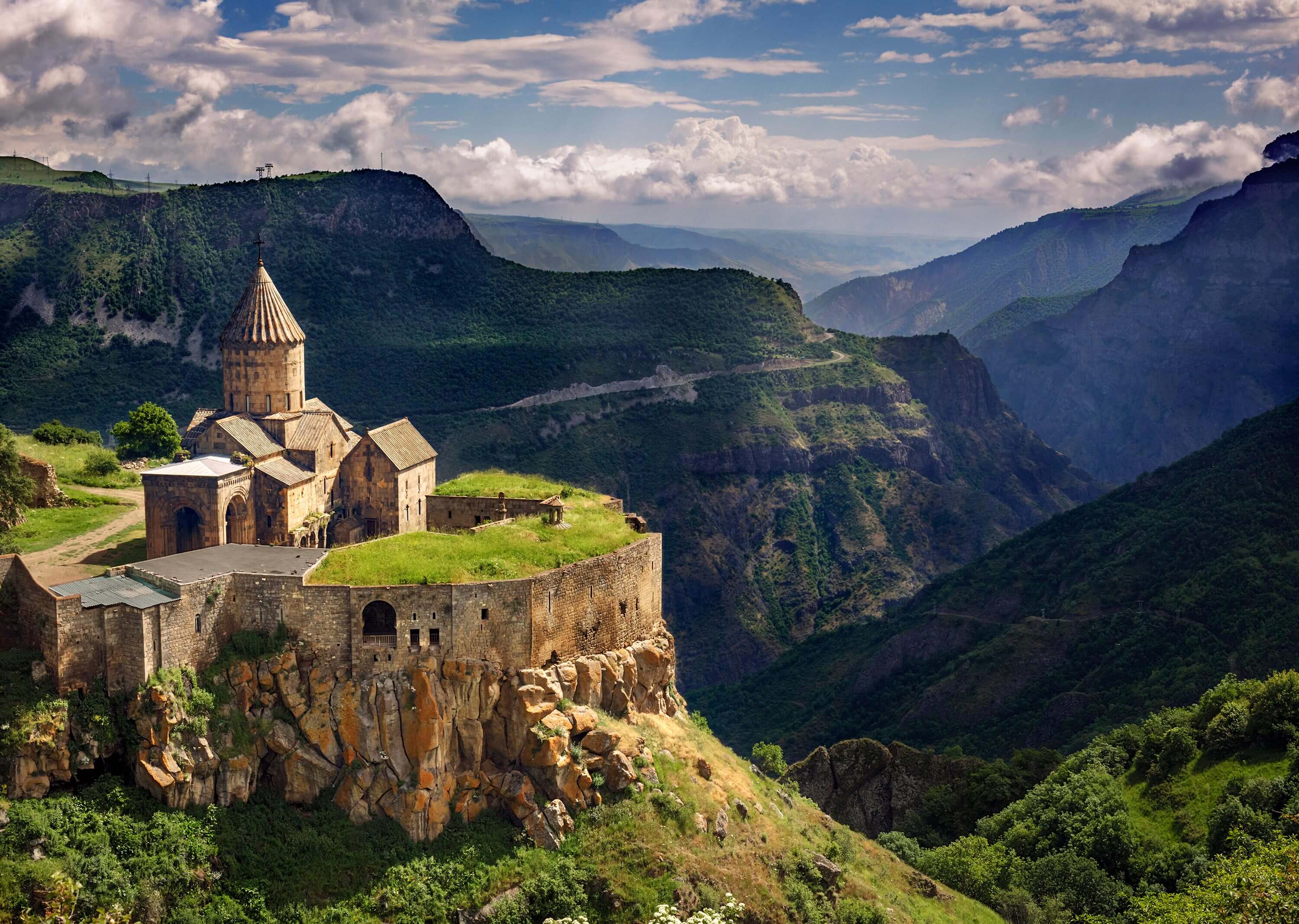 Armenia has become a popular destination for travelers all over the world seeking to explore a nation rich with culture and an abundance of historic sights and landscapes.

Enjoy the view of Mount Ararat

It’s impossible to visit the capital of Armenia, Yerevan, without noticing its magnificent natural landmark, Mount Ararat. This emotive and awe-inspiring mountain is beautiful in any season. Traditionally, Mount Ararat was the symbol of the motherland for all Armenians, and it remains so today. Ararat is known as a Biblical mount, as it was mentioned in the Bible during the story of the Great Flood. According to the tale, Noah’s ark stopped exactly on the mount and after a while, he settled in the Ararat Valley with his family. Despite the fact that Ararat is visible from many parts of Yerevan, for the most beautiful view it is best to climb to the top of the Cascade, or go to the observation area in Victory Park . For a truly breathtaking view, drive out of Yerevan to the monastery of Khor Virap, where you will feel like you can almost touch the mountain.

Explore The First Christian Country In The world

Did you know that Armenia was the first country in the world that adopted Christianity as a state religion? It happened in 301 AD with the assistance of Gregory the Illuminator and Armenian king Trdat III. The country began the destruction of pagan temples and the construction of Christian churches. The very first was the Echmiadzin Cathedral, which became the first Christian cathedral in the world. You can see this magnificent creation in the town of Echmiadzin, the religious center of all Armenians. Today, religious monuments of Christianity can be seen everywhere throughout Armenia. Look out for their majestic medieval architecture, which, juxtaposed against the striking surrounding landscapes, create a spectacular sight. We also recommend paying a visit to the mysterious Monastery of Geghard, half-carved in the rock and over 800 years old. Alternatively, fly over the deep gorge to the Monastery of Tatev, a pearl of medieval Armenian architecture, or visit the prison where Gregory The Illuminator suffered at the Monastery of Khor Virap.

Take The Longest Ropeway In The World

You can get to the one of the most magnificent creations of medieval Armenian architecture, Tatev monastery, by a ropeway, which happens to be the longest in the world (5,752 meters). Not one for those with a fear of heights, as you’ll find yourself walking at 320 meters above the picturesque gorge of the River Vorotan for 12 minutes. At the end of the journey, you’ll arrive at a unique monastery, built in the 9th-13th centuries.

Take A Dip In The Inverted Sky

Lake Sevan is located so high up in the mountains, that when you sit on the bank it seems that the water surface is about to touch the sky. This amazing lake is the largest and possibly the most beautiful in the Caucasus. The clean fresh water only gets warm in the middle of the summer, which means it is the perfect place to cool down on a hot day. The lake, which locals call ‘the Armenian Sea,’ is surrounded by mountains. Spend an afternoon here and notice how every hour the water changes its color, from azure to turquoise to navy blue. You can also explore the monastic complex of Sevanavank, built in 874, located nearby.

Taste The Most Ancient Cuisine In The South Caucasus

Armenian cuisine is one of the oldest in Europe and the oldest in the South Caucasus. The dishes here are diverse and delicious thanks to the use of lots of spices, herbs, and wild flowers. In Armenia, and especially in Yerevan, there are many traditional restaurants offering a great choice of local dishes. To start with you can order spas, creamy and low-calorie soup, prepared from fermented Armenian yogurt (matsun). For the second, try Armenian kyufta (meatballs) or tolma (grape leaves stuffed with minced meat). Also make sure to try juicy barbecue or khorovats, as locals say. Its preparation is a real ritual in which, according to traditions, only men take part. As a snack, sample the white Armenian cheese and basturma (dried meat with spices). You can wrap this in lavash, Armenian national pita bread included in the UNESCO Intangible Cultural Heritage list. For dessert, the best choice is the Armenian gata, a puff pastry that melts in your mouth.

Enjoy The Great Variety Of Fruits And Vegetables

Due to the favorable climate and the warm rays of the sun, the Armenian land provides a huge amount of juicy fruits and healthy vegetables for its residents. Every year in the summer and autumn the shop shelves are crammed with a variety of fruits, berries, and vegetables. When you visit, make sure to try the famous golden Armenian apricot, which absorbs the bright rays of Armenian sun every year and is guaranteed to please due to its gentle taste and aroma..

Due to the mountainous terrain and favorable climate, Armenia is a great place for extreme sports. In recent years, it has become especially popular for paragliding. The places to fly in Armenia are diverse and picturesque with predictable macrometeorology. In summer, you can also enjoy widespread trekking and hiking. In winter, the country has excellent conditions for ski and snowboard lovers. The most popular ski resort is Tsaghkadzor, which has a four-speed chairlift, equipped with modern and safe technology and more than a dozen well-equipped ski slopes. In comparison to other European destinations, Armenia is a great alternative place to ski, with equipment available at affordable prices.